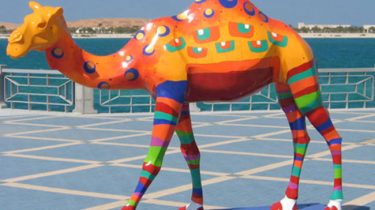 Camels are indeed an integral part of Arab culture and over the years they have been a source for food and travel. Camels can be categorized into two – The Arabian camel with one hump and the Bactrian camel, also known as Asian camel having two humps. The most interesting feature of these animals is their capability to survive in harsh conditions of desert. Their ability to travel long distances up to 190 km distance in a day and store food makes them unique from all other animals. Camels are omnivorous and eats everything vegetables, meat etc. These animals are very peaceful by nature and maybe that’s why they are the heart of Arabian society. The animal is famously known as “ship of the desert”. According to historical facts it is said that camels were domesticated around 2500 BCE. In ancient days a camel was considered to be the most prized possession of Arabian people. In Arabian language “camel” has more than 160 names in fact they are assigned different names as they grow. For instance one year old camel baby is known as Hewar, a two year old as Fateem and a three year old as Haj. Camel is also mentioned in, “The holy Quran”, which describes it as, “a gift to mankind”, thus making it a significant part of Arabian culture. In earlier days it was also a gift given as Mehar to the bride’s family during a marriage and also given as Zakat for charity purpose. Bedouin tribes of Arabian Peninsula or the great warriors, who later on conquered Byzantine and Persian Empires are one such tribe having rich camel culture as their entire economy depended on camel husbandry. Camels were used by Bedouins for food, milk, trading and camel races (a cultural tradition), even today many Bedouins still depend on Camels.

As camel is important to Arabian culture, to give an Arabian ambience to your place you definitely need to add a decorative camel to your interiors or exteriors. You can now decorate your space with beautifully crafted fiber camel statues from AL-SAQR. Over the years we have established ourselves as one of the finest Fiber products manufacturing and supplying company throughout UAE. We have made 18&quot; tall Magritte and 6 foot high models of camels and many more varieties which can be seen at various venues in Dubai like Cityscape Dubai world trade center, museums, parks, etc. Not only Dubai our fiber camels, can be seen all over UAE in various colorful and beautiful designs. Our range of products doesn’t limit to decorative camels; we have a wide variety of fiber products of superior quality.